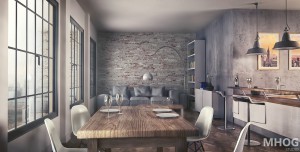 Sometimes, loft apartments are one component of municipal urban renewal initiatives that also include renovation of industrial buildings into art galleries and studio space as well as promotion of a new part of the city as an “arts district.”

Originally popular with artists, they are now highly sought-after by other bohemians, and the gentrification of the former manufacturing sectors of medium to large cities is now a familiar pattern.[1] One such sector isManhattan‘s Meatpacking District. The adoption of the Adaptive Reuse Ordinance (2001) in the City of Los Angeles (primarily the Arts District) is another example of such legislation to encourage the conversion of no longer economically viable industrial and commercial buildings to residential loft communities. Such is the demand for these spaces that real estate developers have taken to creating ready-made “lofts” in urban areas that are gentrifying or that seem primed to do so. While some of these units are created by developers during the renovation of old buildings, a number of them are included in the floor plans of brand new developments. Both types of pre-fab loft offer buyers or renters proximity to urban amenities afforded by traditional lofts, but without perceived safety risks of living in economically depressed formerly industrial areas.