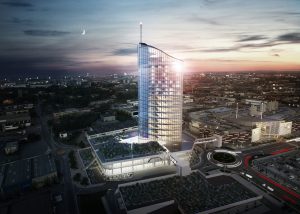 Because every year this world renowned and greatly loved city hosts large international tourist flows with an equally large spending capacity. Venice is also the centre of an affluent and productive metropolitan hinterland which, with the nearby cities of Padua and Treviso, takes in over 1.5 million inhabitants.

International tourism in the Veneto region is growing quickly. In 2015, tourist incomes coming from foreign visitors to Veneto grew 8.2% on the previous year. The share of the Province of Venice is over 60% of the total.

This astounding growth comes mainly from tourists from countries with high incomes (the United States, Germany, Japan, the United Kingdom and Canada), and more than 7% of the 8% total growth has been generated by guests who chose hotel accommodation.
The spending in art cities – already high – has further accelerated, and provided the main share of the overall growth of tourist income.

Those data, when merged with the upturn in consumption of the over 1.5 million local population of the hinterland of Venice, one of the most advanced and productive in Italy, make up the reason for developing such an accommodation and retail structure as Venus Venis, which meets all the highest international standards and which, by now, Venice is eagerly waiting for.

The top two levels of the tower are devoted to restaurant services. The lower level hosts the largest hall, together with kitchen and services while the upper one has the smaller restaurants, of which one is south-facing, circular and revolving.

On the roof is the panoramic terrace which guests can access and take in breath-taking view of Venice.

The levels from 10 to 19 of Venus Venis will accommodate a luxury hotel which matches the highest international standards. It has 120 rooms, reception and general services of hall and breakfast area. There will be also a wellness center with spa. The total area dedicated to the hotel’s guests is thus about 9,000 sq.m.

Manage Cookie Consent
To provide the best experiences, we use technologies like cookies to store and/or access device information. Consenting to these technologies will allow us to process data such as browsing behavior or unique IDs on this site. Not consenting or withdrawing consent, may adversely affect certain features and functions.
Manage options Manage third parties Manage vendors Read more about these purposes
View preferences
{title} {title} {title}